he use of graphene materials as protective coatings for metallic substrates has received much attention because of graphene’s ability to seal a metal surface and prevent the diffusion of most corrosive species to the metal surface. A defect-free graphene sheet may entirely isolate the metal from its environment as it is impermeable to all gas molecules, including helium, as well as a large number of reactive and corrosive species. We test this proposal in two ways; First by growing high quality graphene layers on single crystal metals surfaces and then exposing these systems to controlled gaseous environments; and secondly by attempting to prepare graphene films on real-world metallic alloys and exposing these to harsh and corrosive environments.

We have recently shown that the hydrogen functionalization of graphene on an Ir substrate improves coating properties of graphene. This happens due to the formation of strong bonds between the graphene and the metal substrate as shown in Figure 1a. The bonding between H-functionalized graphene and the substrate prevents intercalation of CO at the graphene–metal interface, thus increasing the protection capabilities of the graphene-based coating. The homogeneous distribution of interfacial bonding across a large area was observed to yield a protection against CO gas, up to at least 10 times higher pressure and 70 times higher fluence than that needed to break the bare graphene coating on Ir. Hydrogenated graphene on Ir(111) was used only as a model system. The hydrogen induced bond formation between graphene and other metal substrates are expected to form as well. The reported method thus provides a means to enhance the properties of graphene-based materials as anticorrosion coating for metals. More information can be found in ACS Appl. Nano Mater. 2018, 1, 9, 4509-4515.

The limitations of graphene as an effective corrosion-inhibiting coating on metal surfaces, here exemplified by the hex-reconstructed Pt(100) surface, are probed by scanning tunneling microscopy measurements. While exposure of small molecules directly onto the Pt(100) surface will lift the reconstruction, a single graphene layer is observed to act as an effective coating, protecting the reactive surface against CO and O2 exposure for pressures below 10-6 mbar.  See the figure below: 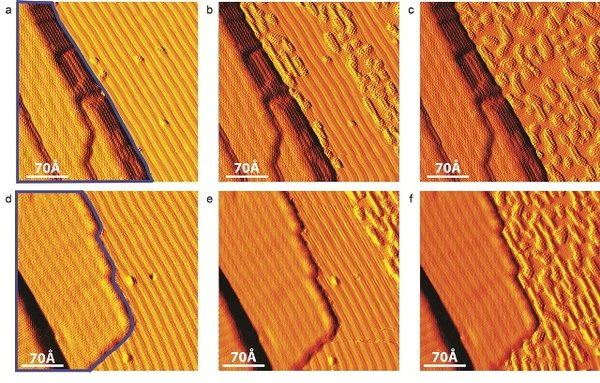 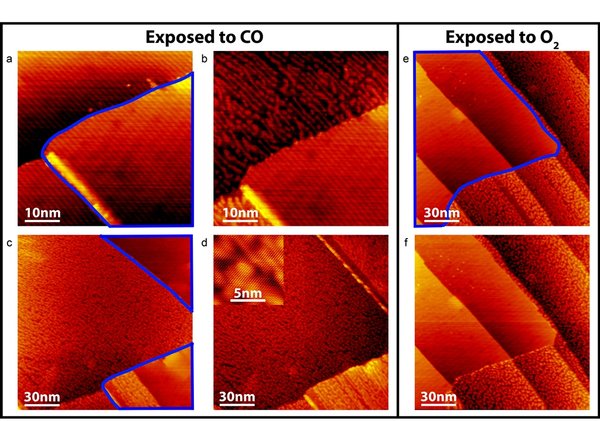 The limitations of the coating effect are further tested by exposure to hot atomic hydrogen. While the coating can withstand these extreme conditions for a limited amount of time, after substantial exposure, the Pt(100) reconstruction is lifted. Annealing experiments and density functional theory calculations demonstrate that the basal plane of the graphene stays intact and point to a graphene-mediated mechanism for the H-induced lifting of the reconstruction. See the figure below: 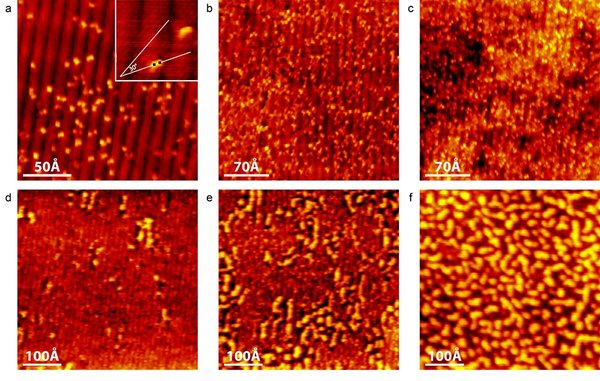 STM images of hydrogenated graphene on Pt(100). (a)-(f) Graphene exposed to atomic D for 2 s, 5 s, 10 s, 20 s, 25 s and 60 s, respectively. The small bright protrusions are clusters of hydrogen atoms adsorbed to the graphene sheet. The extended bright protrusions (indicated by the two white arrows in (d)) are ascribed to the lifting of the Pt(100) reconstruction. Inset in Figure a, high resolution of two hydrogen protrusions after 2 s of H exposure. The two white lines follow the direction of a typical hydrogen protrusion and a graphene zigzag direction, respectively. The two black squares are placed on the centre axis of the protrusion separated by 2.46 Å. From the orientation, shape and size it can be deducted that it is either ortho- or para-dimers.

High resolution STM images demonstrate that the hex-reconstructed Pt(100) surface remains intact under ambient atmosphere for up to 6 months at room temperature: 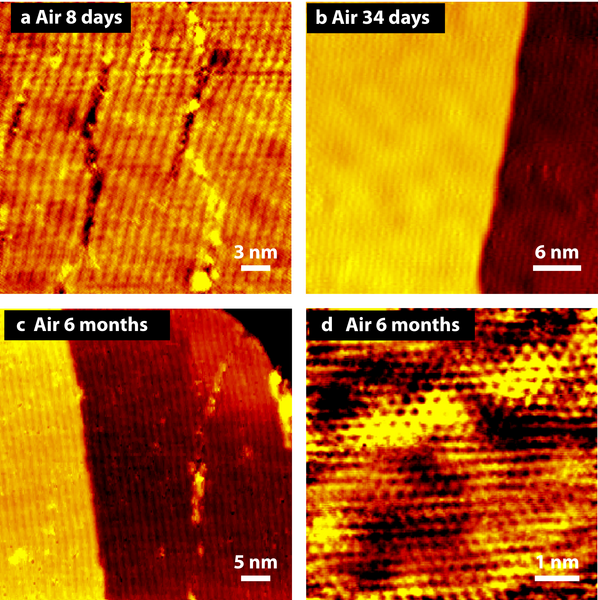 STM images of graphene–Pt(100) following air exposure at room temperature. The coating was deemed successful if the STM images revealed the survival of the Pt(100) surface reconstruction over most of the surface. In Fig. a–c it is evident that the reconstruction of the Pt(100) surface, represented in the images as vertical lines running from top to bottom, remains predominantly intact. In Fig. b and c the bright and dark areas represent two different terraces, separated by a step edge running from top to bottom, on the Pt surface. In Fig. c there are some areas were the Pt reconstruction has begun to lift, represented by the bright protrusions in the image. An atomically resolved image of an area with lifted reconstruction is shown in Fig. d. From this image it is evident that the graphene carbon lattice remains intact despite the lifting of the reconstruction.

The graphene coating also protects the Pt substrate from water, at both room temperature and if the sample is heated to 60 °C:

STMs image of graphene–Pt(100) exposed to water for (a) 14 hours at room temperature; The noise has been filtered from this image to reveal the Pt(100) reconstruction. A fast fourier transform of the image is depicted in the inset (upper right corner) with arrows marking the points corresponding to the recon- struction. (b) STM image of graphene–Pt(100) exposed to water for 75 min at 60 ° C. The reconstruction remains intact.

Next, we exposed the substrate to a sea-water analogue -  saltwater (0.513 M NaCl) at room temperature and at 60 °C. The coating fails to protect against hot saltwater with STM images demonstrating that the reconstruction is lifted: 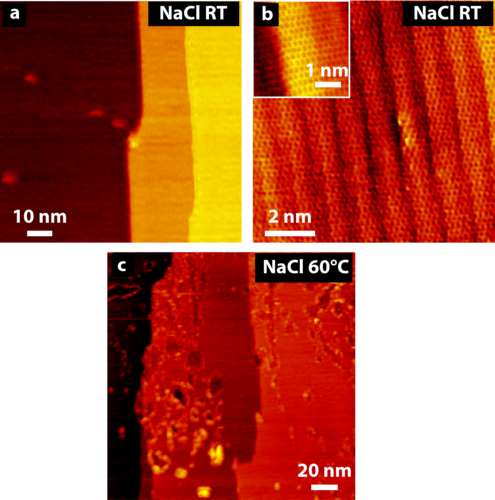 Moving our experiment from a UHV chamber to ambient conditions allows us to perform Raman spectroscopy measurements on the system. The Raman spectrum for pristine graphene is well characterised and we observe the same peak structure as is documented elsewhere. However, we also notice that this peak structure is influenced by the underlying Pt surface. If the Pt surface reconstruction remains intact, then all peaks are reduced in intensity and are red-shifted to higher wavenumbers. Hence, we can use Raman spectroscopy to determine if the reconstruction is lifted across large areas on the Pt surface. The results mirror the STM data and show that only hot salt water compromises the graphene coating:

Raman spectra corresponding to samples exposed tovarious corroding conditions. Spectra a–c have similar peak shapes and positions, indicating that the Pt surface reconstruction remains intact, while in spectrum d, after exposure to hot saltwater, the peaks have shifted and increased in intensity.

Direct growth of graphene materials on test substrates has been shown to be more successful at preventing corrosion than graphene coatings transferred from a growth substrate to the test substrate. The direct growth of large-scale high-quality graphene coatings often relies on chemical vapour deposition (CVD) methods. CVD methods describe the heating of a substrate in the presence of a gaseous carbon source, such that the thermally activated surface catalyses the chemical conversion of the carbon source into a graphene sheet. This process, however, often requires substrate temperatures of 700 °C and above to produce high quality graphene sheets. These high temperatures are detrimental to many of the alloys commonly used in industrial processes, and hence CVD may not be a suitable means to coat many industrially relevant corrosion prone alloys.

We pursue a different strategy and deposit a solid carbon precursor on the alloy surface and then heat this film gradually until the carbon precursor polymerise to make a graphene film. We have explored using coronene as the solid source of carbon and Inconel 625 as the test metallic alloy.

A small piece of Inconel 625 was cut into a circular puck and polished. The revised low-temperature growth recipe was used to produce the graphene film on the center of the puck. You can clearly see the coated area by eye. Optical microscopy (center) shows the coating to consist of a continuous network of micrometer-sized graphene domains. The scanning electron microscope image (right) shows how these graphene domains connect together.

We can use a focused beam of ions to etch a small pit into the substrate, which allows us to image a cross section of the coating using the scanning electron microscope. This experiment shows that the coating is not just one layer thick, but consists of several layers of graphene stacked on top of one another to reach a minimum thickness of 7 nm. Raman spectrsocopy is used to check that the coating is indeed, graphene-based. The observation of the D and G peak confirms this and neither of these peaks were observed on the pristine Inconel surface before the coating procedure:

A cross-section of a coated Inconel 625 sample was obtained by focused ion beam (FIB) milling, followed by SEM imaging. The sample was coated in gold as well as a thick layer of carbon prior to FIB milling. The various layers along the cross-section are labelled. The line profile of the image intensity (inset) allows for extraction of the coating thickness. Right - Representative Raman spectra from a pristine Inconel 625 sample is compared to a coated sample. The range includes the area where the D and G peaks from graphite-like materials is observed.