Manipulating the Electronic Properties of Graphene

We have demonstrated a hydrogen functionalization symmetry-driven approach to band gap engineering in graphene. A transition from a hydrogenation structure with honeycomb symmetry to one with rotated triangular symmetry is observed when graphene on Ir(111) is functionalized with hydrogen at elevated sample temperature, Figure 1. A highly periodic rotated triangular hydrogen pattern with the moiré superstructure as a template can be formed at 645K. In this case, hydrogenation is found to occur exclusively on a specific single region in the moiré unit cell, namely the HCP region, resulting in localized hydrogen clusters with 25 Å periodicity. When lowering the hydrogenation temperature slightly to Ts = 626 K, both FCC and HCP regions are hydrogenated, leading to a hydrogenation structure with honeycomb symmetry. On the other hand, an increase in hydrogenation temperature above 645 K leads to hydrogen cluster vacancies in the otherwise perfectly periodic rotated triangular hydrogen pattern. 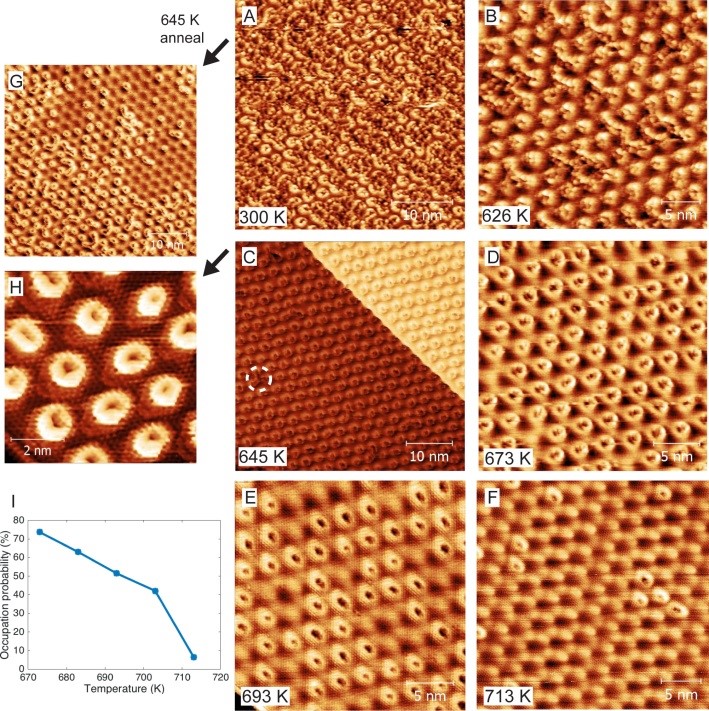 Figure 1: (A to F) STM images of graphene/Ir(111) saturated with atomic hydrogen at a sample temperature of 300 K,  626 K, 645 K,  673 K, 693 K and at 713 K, respectively. An improved hydrogen pattern can be observed with increasing sample temperature. A highly periodic hydrogenation structure following the HCP regions of the moiré structure is found with few defects at 645K.  However, at 713 K, only a few hydrogen clusters are observed.  (G) STM image of graphene/Ir(111) hydrogenated at RT followed by an anneal to 645 K for 1 min. The resulting hydrogen structure is found to be disordered, consisting of areas of high coverage as well as hydrogen-free areas. (H) Atomically resolved image of graphene hydrogenated at a sample temperauture of 645 K. Areas of pristine graphene are found between the hydrogen clusters,  (I) The probability of populating an HCP region with a hydrogen cluster was estimated from the STM images as a function of deposition temperature. The population probability decreases linearly with deposition temperature up to ∼700 K.

ARPES measurements, Figure 2, were employed to investigate the change in electronic structure upon hydrogenation. It was found that a band gap can be opened in the graphene with a size controlled by the hydrogenation temperature. The formation of highly ordered hydrogenated patterns on graphene results in negligible relative broadening of the π-band, as observed by ARPES. The scattering rate of charge carriers in such modified graphene is comparable to bare graphene. These findings are of interest for employing graphene in electronic devices, where a tunable band gap along with preservation of the extraordinary electronic properties of graphene is required. Furthermore, the hydrogen completely desorpts when heated to more than 400 C, and the graphene completely regains its original properties. Detailed information can be found in ACS Nano 2016, 10, 12, 10798-10807.

Figure 2. Angle-resolved photoemission spectroscopy measurements of (A) clean graphene/Ir(111). Graphene hydrogenated at a sample temperature of (B) 645 K and (C) at 693 K, showing a band gap of at least 290 and 146 meV, respectively. The spectra are cuts through the K point along the A̅ – K̅ – A̅′ direction of the Brillouin zone, as indicated in the inset in (A). Positions where the widths of the momentum distribution curves were measured are indicated by the arrows in the figure along with the extracted values.

Hydrogenation of graphene on Ir(111)

Graphene, a single layer of graphite, has recently attracted considerable attention owing to its remarkable electronic and structural properties and its possible applications in many emerging areas such as graphene-based electronic devices. The charge carriers in graphene behave like massless Dirac fermions due to the linear dispersion at the  Fermi level, and graphene shows ballistic charge transport which gives rise to extremely high carrier mobility, making it into an ideal material for integrated circuit fabrication.

However graphene lacks a bandgap around the Fermi level, which is the defining concept for semiconductor materials and needed in transistor fabrication where control over carrier concentration is essential. Theory predicts that a tunable bandgap may be engineered by periodic modulations of the graphene lattice. To prove the theoretical results, we grew graphene on an Ir(111) substrate followed by chemical functionalization by atomic hydrogen. The results are shown in figure 3. 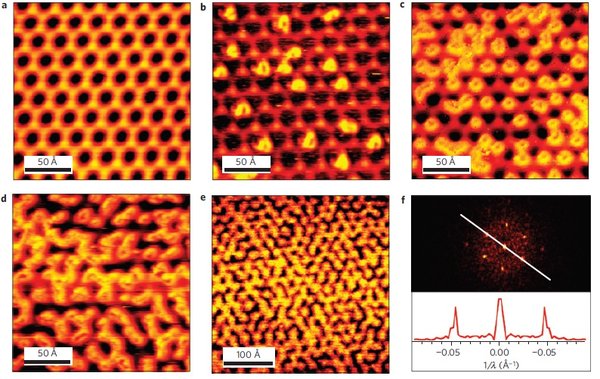 Figure 3: STM images of hydrogen adsorbate structures following and preserving the Moiré pattern of graphene on Ir(111). a, Moiré pattern of clean graphene on Ir(111) with the superlattice cell indicated. b–e, Graphene exposed to atomic hydrogen for very low dose, 15 s, 30 s and 50 s, respectively. The data show the evolution of hydrogen structures along the bright parts of the Moiré pattern with increasing hydrogen dose. f, Fourier transform of the image in e, illustrating that hydrogen adsorbate structures preserve the Moiré periodicity. The inset in f shows a line profile through the Fourier transform along the line indicated. The separation of the peaks corresponds to a real-space distance of 21.5 Å, which is equal to 25cos(30) Å, confirming the Moiré superlattice periodicity.

The STM data clearly show a site preference in hydrogen binding which is preserved even at high doses as in fig 3 e. Data analysis shows that preferred binding sites on the Moiré are hcp and fcc. The bonding scheme is such that C binds hydrogen and Ir substrate atoms alternately, with Ir on one side and H on the other, resulting in a rehybridization from sp2 to sp3. This is only possible in the aforementioned areas since C is placed directly above Ir and thus can form a covalent bond.

To investigate the change in bandstructure due to hydrogenation, angle resolved ultraviolet photoemission spectroscopy (ARPES) was performed to access the valence band structure. The results are shown in figure 4. 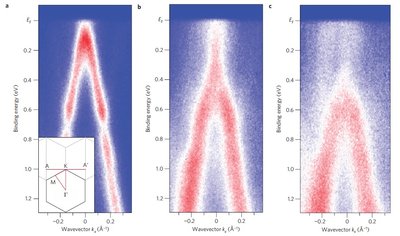 At the highest dose a bandgap of at least 450 meV is induced. The full gap is probably even larger, but since ARPES only probes occupied states, this cannot be confirmed from the data.

Hydrogenation of graphene on SiC

Hydrogenation experiments were also conducted on silicon carbide (SiC) substrate. STM measurements show that hydrogen is not randomly adsorbed at low coverage but follows the 6x6 reconstruction of the substrate. This can be seen in the STM image where hydrogen dimers only bind to bright regions, figure 5a.

Figure 5: (a) Scanning tunneling microscopy image of hydrogenated graphene. The bright protrusions visible in the image are atomic hydrogen adsorbate structures identified as A - ortho-dimers, B - para-dimers, C - elongated dimers, D - monomers (imaging parameters: Vt =-0.245 V, It = -0.26 nA). Inset in (a): Schematic of the A ortho- and B para-dimer configuration on the graphene lattice. (b) Same image as in (a) with inverted color scheme, giving emphasis to preferential hydrogen adsorption along the 6 × 6 modulation on the SiC (0001)-(1 × 1) surface. Hydrogen dose at Tbeam = 1600 K, t = 5 s, F = 1012-1013 atoms/cm2 s.

This site preference can be ascribed to the curvature of the graphene sheet which in these regions is convex. Since the hybridization changes from sp2 to sp3, the ideal binding geometry changes from planar to tetrahedral thus the activation energy is lower in convex areas.

At higher doses this preference seems to be lost and larger hydrogen clusters form as the STM image in figure 6 shows.