'Imaging roots and origins of mountains by earthquake seismology'

In the conventional toolbox of physical waves, only mechanical waves may penetrate and potentially resolve the deep structure of the condensed materials of the Earth. This talk explains the use of mobile seismometer arrays serving as our downward telescopes. Focus of the talk is the upper about 300 km of the globe. This is the zone where tectonic plates move and deform, and where the forces unfold which lift mountains, give way to sedimentary basins and drag down subduction zones with catastrophic consequences as seen in Japan in 2011. 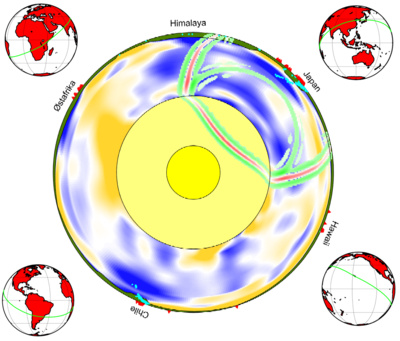 Cross-section of Earth showing transverse-wave velocity anomalies in the mantle. The computed location of the wave-front from the large earthquake in Japan 2011 is shown in red-green. Other earthquakes locations (cyan dots) and volcanos (red triangles) mark the subduction zones.

Wine and cheese will be served at 4 PM