Those of you coming and going via the IFA main entrance have had no trouble discovering a fine LEGO model of our storage ring ASTRID2. Even though the model is super realistic, there is no danger of radiation at all, as the dome over the model absorbs all LEGOtron radiation!

Friday September 4th at 12:00 when we all can be together at the institute again, we will celebrate with a small get-together, and the model will be officially inaugurated. 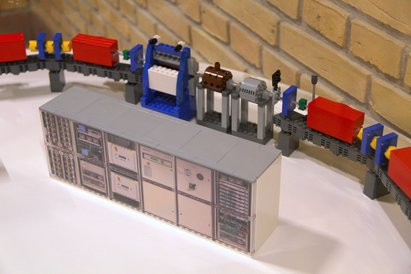 The model represents ASTRID2 in a scale of approximately 1:15. The idea for the model is about as old as ASTRID2 itself. Nyk Jones got the idea and has provided both the design and the actual construction, with a little help from others at ISA. 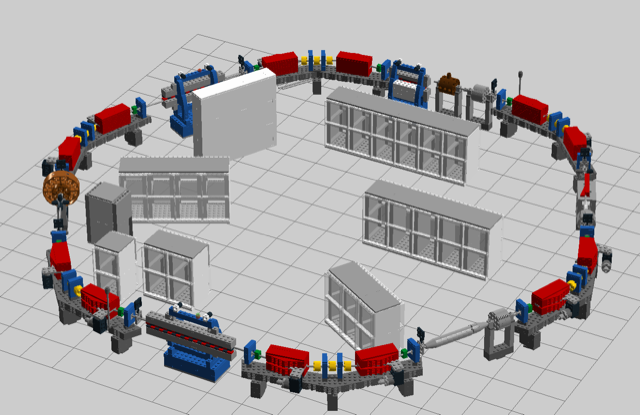 One of the construction programs available for this sort of building was used for the design, giving you the opportunity of having a list of bricks and numbers written out at the end. Some 2000 bricks and several evenings has gone into the model, Nyk explains.

The actual building of the model took a few days, when it started in earnest. Like you will experience with many of the digitally constructed LEGO models, they look fine and stable on the monitor, but weight and gravity is not taken into concern. Before the model could be finished in physical form extra bricks for stability had to be ordered, and this of course took extra time. 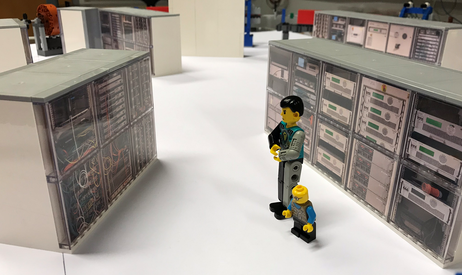 During the construction some extra details were added. Note that you can see what the electronics racks actually contain. Though not made from LEGO, but photographs of the real racks down by the big sister, as suggested by Niels Hertel, it adds some extra touch of realism to the model.

Before you start planning on founding a competing organisation to ISA by building your own model, a warning! The model of ASTRID2 is not available in toy shops, and it hasn't even been suggested for production via LEGO Ideas, so if you absolutely have to, it is time to start raiding the kids' brick boxes at home.