Even during the lock-down our students are working hard times communicating with our Aarhus University satellite.

Even during a lock-down a satellite will continue its orbit, as our Aarhus University satellite Delphini-1 has done. An extremely dedicated team of students has been communicating with Delphini-1 almost as usual, but from their homes. During the short satellite passages concentration is running high. Only when the satellite is sufficiently high over the horizon it becomes visible by the ground antenna, and the you have to hurry to "wake up" the satellite, enable it to receive commands and transmit measurements of its health down to Earth. The last remaining minutes of a passage can then be used for downloading the newest images in order to see if anything of interest has been recorded, and soon the orbit has brought our small satellite too low for any more signals to be received. 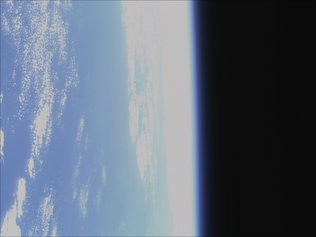 At times the camera will aim at the beautiful horizon of the Earth - not the worst direction to point! Photo: Delphini-1

"Having reached a point in the project where we can take fine pictures almost at will is just super. Now we are working on getting at least one good image of Denmark," Frederik Doktor remarks. He has been on the team since the beginning of the mission. 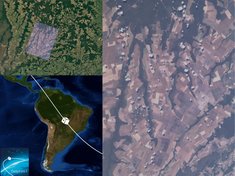 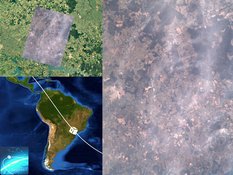 Most of this Spring and Summer has been used to refine the exposure times for the camera aboard Delphini-1, and this part is just about finished now. To begin with the satellite operators are downloading a stream of images in "thumbnail format". Then only the best ones are received in full resolution, and it may take several passes to download just one image, so time is valuable. The images are marked with the time of exposure, and with an exact knowledge of the orbit it is possible to calculate the approximate area that the image covers. The big problem is that it is not possible to fully control Delphini-1. If follows unerringly the orbit dictated by the Laws of Newton, but controlling in which direction in space the camera is pointing at any given time is a problem not yet mastered. Even for the very best images it takes a bit of detective work to determine what part of the surface of the Earth (or sky) a picture covers - and the great rainbows-and-unicorns task have not succeeded yet: getting a picture of Aarhus or any other part of Denmark. But we are working on it, the students say.