Daring maneuvre for a possible picture of Denmark from Space

The first Aarhus University satellite, Delphini-1, a 10 x 10 x 10 cm (1U) cubesat, has been orbiting Earth alone for two years today, 31 January 2021. This is far more than what duration could be expected at deployment. The end is nigh, though. Delphini-1 will decay into the lower atmosphere and burn as planned within the next few months.

"At the beginning of 2020 our team of students that are managing Delphini-1, has systematically worked with the camera aboard the satellite, optimizing the conditions for good images. We have obtained fine images of both the Earth and of stars during the Summer of 2020, and Delphini-1 is today one of the best 1U cubesats producing pictures of the Earth. Since Spring 2020 the Delphini-1 team have been using both pictures and sensor data onboard in understanding the movements of the satellite during its orbits around Earth. Our small satellite is not like the bigger ones equipped with reaction wheels or rocket engines. There is no easy way to have it point at at specific direction. This means that the pictures that we have are all from areas on the southern hemisphere of the Earth or of a limited part of the sky. We would very much like to have pictures from the northern hemisphere also and time is running out, causing us to try a quite daring maneuvre. We have attempted to turn the satellite 180 degrees with aid from the magnetic field of the Earth. The maneuvre was succesful, giving Delphini-1 an attitude now where it points the camera towards Earth when it is moving over the northern hemisphere. At present we are crossing our fingers hoping that there is enough time left both to take some new pictures and not least to have them downloaded in full resolution. And maybe even a picture of Denmark?" 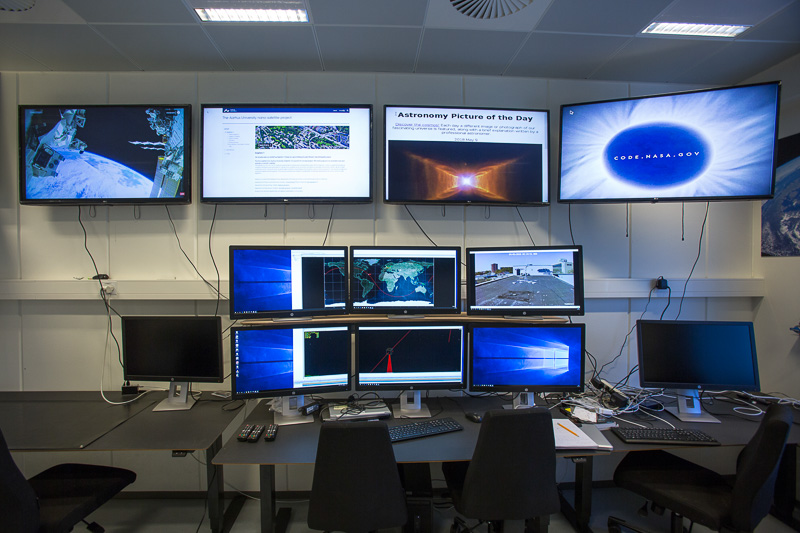 Mission Control at the Department of Physics and Astronomy. Photo: OJK

Delphini-1 has been assembled and tested by students at the Department of Physics and Astronomy, the Department of Geoscience and the Department of Engineering at Aarhus University. Since the deployment of the satellite from the International Space Station on 31 January 2019 various teams of students and employees from these departments have been working intensely on learning to handle the small satellite - most of the time as voluntary time and often at inconvenient hours. Orbital mechanics has no concern for healthy sleeping periods. 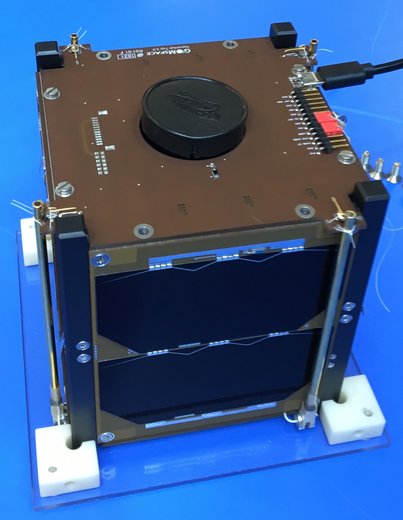 Delphini-1 during last tests before the launch to the ISS - and yes, we did remember to remove the lens cap!. Photo: NanoRacks.

All communication with the satellite has to be within the few minutes of each orbit when the satellite is above the horizon as seen from our tracking antenna situated on the roof of one of the university buildings at Katrinebjerg. "House hold data" are exchanged, pictures as line after line and orbit after orbit are downloaded and the camera is given new orders for exposure values and times for the next attempted series of images, with the satellite on its own out of range of the control station at Aarhus University. Delphini-1 and the ground station has been financed by the Aarhus University Research Foundation. The launch has been donated by the European Space Agency, ESA in collaboration with the Danish Ministry of Education and Research. The satellite has been delivered as a kit from the Aalborg based company GomSpace, and from there we have also had lots of support, courses, advice and assistance during the whole process.

A selection of the best images can be found here. They can be used with proper credits. 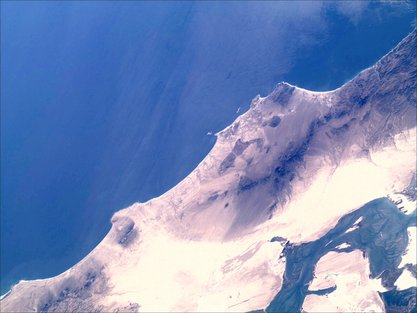 The maneuvre succeeded! We have just downloaded a Delphini-1 image of an area on the Northern Hemisphere, showing  a part of the Californian Peninsula in Mexico, between Bahia Asuncion and Guerrero Negro, as seen at an oblique angle from the Northeast.