Once upon a very distant future, when it has used up the Hydrogen in its core, our Sun will inflate and turn into a red giant star. This phase of the life of the Sun and all other stars like it up to twice its mass is quite short - relatively, and it ends with at bang - the core goes through a "Helium core flash." These flashes have been predicted for the last 50 years by theoretical astrophysicists, but until now it has never been observed. A recent paper in Nature Astronomy Letters of 30 September 2019 indicates that it may happen soon, though.

The paper is titled "Asteroseismic signatures of the helium core flash". It is a collaboration between researchers in Argentina, USA and Denmark, and professor Jørgen Christensen-Dalsgaard of Stellar Astrophysics Centre at Aarhus University is co-author. In the paper the astronomers report a thorough recalculation of the theory, showing that in a class of compact stars related to the red dwarfs but lacking their outer layers, this internal helium flash will cause small variations in the brightness of the star; only a few thousands of its average magnitude. But enough enabling the NASA satellite TESS to observe it if it happens in a relatively nearby star.

A Helium flash will cause a series of different waves moving out through the star. In the outer reaches of sunlike stars the gas already seeds and boils, and this makes the stars vibrate like bells stricken by a bell clapper. This has been observed by the astronomers over several years; in the Sun as weak periodic variations in its brightness, and in other stars over the last decade. The scientific study is called helioseismology with the Sun and asteroseismology otherwise. The observations teach us of the processes inside the stars in the same way that we learn of the inside of the Earth by studying the propagation of waves from earthquakes - seismology.

The destiny of the Sun (in some 5 billion years) is governed by lack of ressources. Over time the nuclear fusion processes in the core transform Hydrogen into Helium, eventually causing too little Hydrogen to be available for sustaining the energy production process that we enjoy at present. To keep up shining while the amount of Hydrogen is reduced, it will be necessary for the Sun to increase its core temperature. This feverish state will be visible on the outside as an enormous bloating (thus "giant star") and a declining temperature on the surface - the Sun reddens. After some time the temperature around the core is sufficiently high that a new proces will start: Helium now fusions into heavier elements like Carbon and Oxygen. The transition is quite sudden, and like an earthquake, beginning with a very energetic output, followed by a series of successively weaker quakes over the next 2 million years - a relatively short transitional period in the life of most stars. 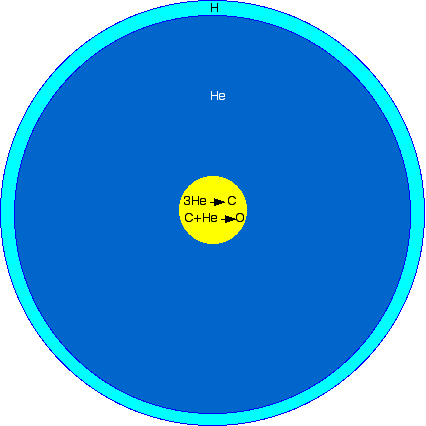 Cross-section of a B-subdwarf. Under a thin layer of Hydrogen the very hot core of the star is exposed. When fusion of Helium has started, Carbon and Oxygen is produced at the very centre. Illustration: Wikipedia.

The new and promising angle in the recent paper is that the astronomers have been calculating the relationships in a very special and up to now not very well understood type of stars designated sub-dwarf B. These are former red giant stars that for reasons unknown have lost most of their outer layer of Hydrogen. With these we are able to look directly at the very hot core of the sub-dwarf B stars. An ordinary red giant has a surface temperature of some 3000°C, but these 'stripped' stars show a surface temperature of between 20000 and 40000°C - they are not red, but searing blue-white. The remaining thin layer of Hydrogen is not thick enough to dampen the oscillations from the repeated Helium core flashes, giving the researches an expectation of being able to finally observe directly what from at theoretical point of view looks very promising.

- and actually these Helium core flashes may already have been observed. Several of the stars observed with the satellite telescopes CoRoT and Kepler show som unexplained oscillations looking very much like what would be expected if they were caused by series of Helium core flashes. One of the best candidates for future study is the star named Feige 46, and according to the present observations program it will be observed with TESS in late February 2020. Jørgen Christensen-Dalsgaard at Aarhus University and collaborators over most of the planet are eager to learn whatever news is discovered, also because it is important for our knowledge of our own Sun and its future evolution.

The original paper in Nature Astronomy Letters is here.