To explode or to collapse?

Nuclear physicists succeeded to experimentally determine nuclear processes operating at conditions ten million times denser and 25 times hotter than the center of our Sun. This measurement removes the nuclear uncertainty deciding the final fate of intermediate-mass stars whose explosion is expected to have produced the Crab Nebula. This achievement stresses the fascinating opportunities offered by radioactive ion beam facilities.

Stars have different evolutionary paths depending on their mass. Low-mass stars such as the Sun will eventually become white dwarfs. Massive stars, on the other hand, finish with a spectacular explosion known as a supernova, leaving either a neutron star or a black hole behind. The fate of both low- and high-mass stars is well understood but the situation for intermediate-mass stars, which weigh 7-11 times as much as the Sun, has remained unclear. This is surprising since intermediate-mass stars are prevalent in the Galaxy.

The final fate of intermediate-mass stars depends on a tiny detail, namely, how readily electrons are captured on the isotope neon-20 in the stellar core. Depending on this electron capture rate, the star will be either disrupted in a thermonuclear explosion or it will collapse to form a neutron star. In 2014 theorists pointed out that the strongly suppressed, and hence previously ignored and experimentally unknown, transition between the ground states of neon-20 and fluorine-20 was the last piece of information needed to determine the electron capture rate at the astrophysical conditions reached in intermediate-mass stars. Now, an international collaboration of physicists has succeeded in obtaining the first accurate determination of this important rate through a combination of careful measurements of the beta-decay of fluorine-20 and theoretical calculations. The experiment took place under conditions far more peaceful than those found in stars, namely at the Accelerator Laboratory of the University of Jyväskylä. The experiment has measured a surprisingly strong transition between the ground states of neon-20 and fluorine-20 that leads to electron capture on neon-20 occurring at lower density than previously believed. For the star, this implies that, in contrast to previous assumptions, it is more likely to be disrupted by a thermonuclear explosion than to collapse into a neutron star.

The new result is the last missing piece that was needed to understand the nuclear processes that take place in the interior of the star during the last moments of its life. Since thermonuclear explosions eject much more material than those triggered by gravitational collapse, the results have implications for galactic chemical evolution. The ejected material is rich in titanium-50, chromium-54, and iron-60. Therefore, the unusual titanium and chromium isotopic ratios found in some meteorites, and the discovery of iron-60 in deep-sea sediments could be produced by intermediate-mass stars and indicate that these have exploded in our galactic neighborhood in the distant (billions of years) and not so distant (millions of years) past.

In the light of these new findings the most probable fate of intermediate-mass stars seems to be a thermonuclear explosion, producing a subluminous type Ia supernova and a special type of white dwarf star known as an oxygen-neon-iron white dwarf. Detection or non-detection of such white dwarfs in the future would provide important insights into the explosion mechanism. Another thing to be clarified is the role played by convection in the explosion, namely, how the material moves around in the interior of the star. But this is a job for the astrophysicists - now the nuclear physicists have contributed their part! 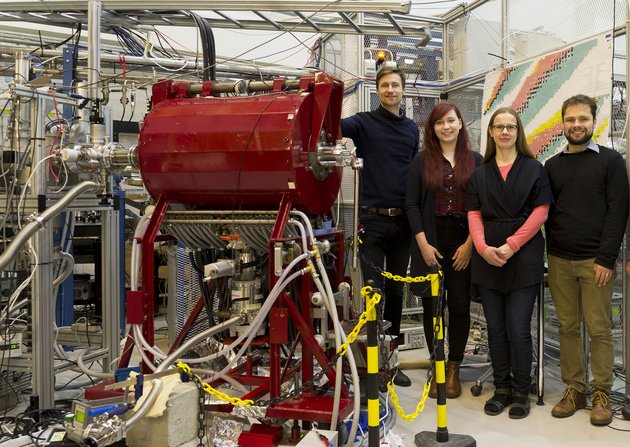 At the experiment. Left is Oliver Kirsebom, main author of both papers. Left to right is then collaborators Marjut Hukkanen, Anu Kankainen and Cobus Swartz. Photo: University of Jyväskylä.

The new reults were publishet on 24. December 2019 in Physical Review Letters and Physical Review C with the titles "Discovery of an exceptionally strong beta-decay transition of 20F and implications for the fate of intermediate-mass stars" and "Measurement of the 2+ -> 0+ ground-state transition in the beta decay of 20F". On top of this, the American Physical Society gave the paper special mention as an "Editors suggestion" featuring a separate bacground paper

Apart from the researchers connected to IFA, the groups behind the papers come from Finland, The Netherlands, USA, Gt. Britain, Germany, Sweden, India and Spain. This work has been made possible thanks to support from a.o. the Villum Fond.