Three IFA researchers to receive grants from the Carlsberg Foundation

Jeffrey S. Hangst is participating in the Carlsberg Foundation ”Semper Ardens” research projects, working with the ALPHA-3 project at CERN. 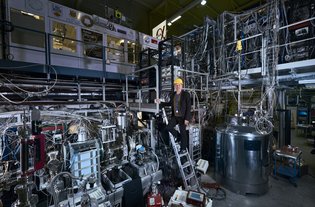 The ALPHA-3 project is a new initiative to make very precise studies of antimatter at CERN in Geneva. The ALPHA Collaboration is the only group in the world that can study the properties of antihydrogen, the simplest atom of antimatter. Current theory holds that antimatter - which mysteriously disappeared from the Universe sometime after the Big Bang - must have identical properties to 'normal' matter. The ALPHA-3 project aims to test this assumption with precision measurements of the spectrum of antihydrogen. The hydrogen spectrum was famously elucidated by Niels Bohr's quantum theory of the atom, and today hydrogen is one of the most well-understood systems in science. ALPHA researchers, after more than 25 years of effort, are determined to reach hydrogen-like precision in antimatter.

The question of matter-antimatter asymmetry is one of the most profound remaining questions in modern physics. We simply don't know why the universe is composed of matter - when both matter and antimatter must have been created in equal amounts at the Big Bang. The experiments in the ALPHA-3 Project test the most basic assumptions of the so-called Standard Model of fundamental particles and their interactions. Is there something about antimatter that is undiscovered or overlooked? Precision spectroscopy of antihydrogen is one of the most sensitive tools that we can bring to bear on this question, and ALPHA is unique in the world in having the capability to do so.

The research will be conducted at the Antiproton Decelerator (AD) facility at CERN in Geneva. The AD is unique in the world as a source of low-energy antimatter for fundamental studies of nature. Professor Hangst is the founder and leader of the ALPHA Collaboration, an international team of about 50 scientists who are dedicated to studies of antihydrogen. ALPHA is the only experiment that has demonstrated production, trapping, and spectroscopy of antihdyrogen atoms. The ALPHA-3 project builds upon the group's expertise and expands their capabilities to allow construction of a next-generation spectroscopy experiment. The grant provides money for new laser and metrology hardware, as well as financing for young researchers at the PhD and postdoctoral level.

There are no current applications of the very fundamental research conducted by ALPHA. The project has been an inspiration to hundreds of thousands of young people who visit CERN or follow us online. ALPHA is an example of Danish-led, curiosity driven research at the highest international level.