Once upon at time in a galaxy close by - actually our own Milkyway - a passing dwarf galaxy was caught in and swollowed whole. We still see the traces of this. Paper in Nature13. January 2020.

A recent paper in Nature describes how a group of astronomers, many of them related to Stellar Astrophysics Centre at Aarhus University, from studies of a single star ? Indi can calculate limits to an ancient galaxy merger less than 11.5 billion years ago.

Main author of the paper "Age dating of an early Milky Way merger via asteroseismology of the naked-eye star ? Indi" is Bill Chaplin of Birmingham University. He and a long list of co-authors are all (28) affiliated with SAC.

Knowing that the Milky Way over billions of years has swollowed other galaxies is nothing new. Stars from the original galaxies orbit in various different ways than "the natives" and often the composition of elements is also slightly different.

The progenitor star in this study is one of the native, but during collision with the dwarf galaxy Gaia-Enceladus the star was pushed from its original orbit in the Halo of the Milky Way into an orbit which makes it stand out. This special track together with new calculations of its age makes it possible to determine that the Milky Way and Gaia-Enceladus must have collided 11.5 billion years ago at the most - and also not much later. 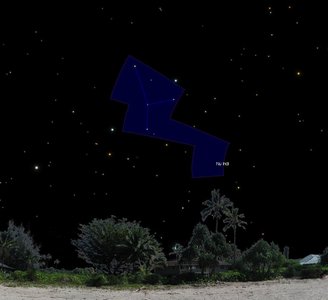 ? Indi is visible to the naked eye on a clear night, provided that you stand sufficiently far South to be able to see the constelllation at alle. The first letter in the name ? Indi is the greek letter "nu".

? Indi has been observed with the NASA exoplanet hunter TESS that mainly looks for exoplanets around the brightest stars in the sky. It doesn't seem that ? Indi any companions in orbit, but TESS will also do another trick: With its cameras the astronomers can follow the stars without breaks for several months. From these data you can observe the oscillations in the stars - asteroseismology - and thus determine a list of the fundamental parameters of a star. Taking in supplementary observations from other telescopes and other instruments, we now know that ? Indi is close to 11 billion years old; an elderly star approximately of doubly the age of our Sun. On top of that it is one of the metal poor stars in the Milky Way. Held together with the position of the star in a "wrong" place in our galaxy, orbiting in a way that clearly shows that it has been disturbed at some time in the past, the astronomical galactic archaeologists had a heads-up. ? Indi is obviously old, its composition of elements complying nicely with being formed in the outer reaches of the Milky Way; in the Halo. After this something must have happened, and it happened obviously after the formation of the star. 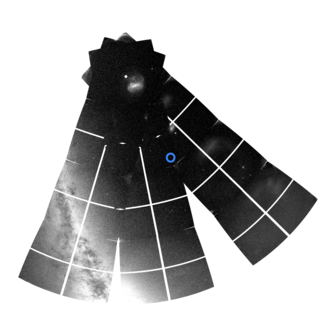 Three of the starfields covered by the TESS satellite in the Southern Hemisphere. ? Indi is in the blue ring. Part of the Milky Way streches through the lower left part of the image. Illustration: J. T. Mackereth 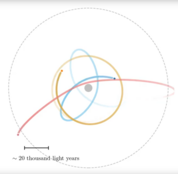 Orbits in the Milky Way for a "native" star (brown), an "invasive" star (red) from a galactic merger and a "disturbed" star (blue) like ? Indi. Still from a video, showing the orbits of the stars in three dimensions. Click on the image to see the video. Source: University of Birmingham.

For a few years now the astronomers have known that a dwarf galaxy at some time in the distant past has collided with our far larger Milky Way. A bunch of stars, now spread out all over the Milky Way are different partly because for their different chemical composition and partly because they move in very oblong orbits and in the "wrong" direction around the centre of the Milky Way, doing so far out in the outer reaches of our galaxy; in the Halo. The main problem has been to determine when the collision happened with this dwarf galaxy named Gaia-Enceladus.

Victor Silva Aguirre, Amalie Stokholm and Jakob Rørsted Mosumgaard are only three of the many researchers affiliated with SAC, participating to the paper. Private photos.

Associate Professor Victor Silva Aguirre, Stellar Astrophysics Centre explains: "We can see that the Milky Way consists of several components of having different ages and different stellar compositions. Like archaeologists we are now digging down into these layers to learn of the origin and development of our own galaxy. Impacts with smaller and larger galaxies in the early history of the Milky Way has been very important for the development, and we are trying to separate the different events in both time and space."

PhD-student Amalie Stokholm is co-author: "? Indi is a lucky strike. It is close, and thus bright enough to enable us to study both the oscillations on its surface with the TESS satellite and also obtain fine spectrographic data from telescopes at the ESO La Silla Observatory in Chile. To supplement we have very precise determinations of the movements of the star from the ESA satellite Gaia. All in all we can clearly see that ? Indi was formed in our own galaxy 11.0 billion years ago, but that the collision with the Gaia-Enceladus galaxy has moved our star away from it's original orbit."

"Even though we know the ages of part of the stars originally formed in the dwarf galaxy, this is no help in determining when the collision proper took place. This is where ? Indi comes in," PhD student and co-author Jakob Rørsted Mosumgaard of SAC elaborates: "Shortly after the galactic collision a lot of new stars were formed out of the colliding interstellar gas clouds from the two galaxies. These new stars have gathered over time in what we name the Thin Disc of the Milky Way, and by determining the ages of these stars we wil also be able to put constraints on the latest possible time of the collission - we are working on it!"