For his master's thesis one of our Aarhus University students has developed software for automation and remote control of two new telescopes in Australia. These two telescopes are the most recent in the Danish-led SONG project, aimed at observing nearer stars and exoplanets.

The newly installed telescopes are the most recent in the Danish-led SONG project, aiming at investigating nearer stars and chasing exoplanets. 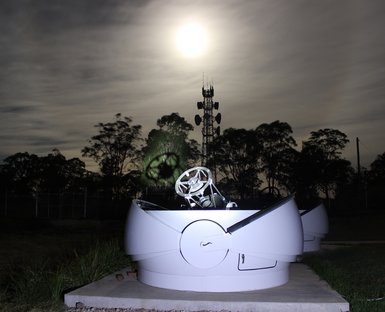 Just before we begin! One of the two new SONG telescopes during testing under a moonlit sky. Photo: Mads F. Andersen/SONG

"Working on software that I could then bring to Australia for installation and testing has been a very special experience to me. Seeing that it all worked as intended was enormously satisfying," master's student Hasse Stræde Hansen explains. 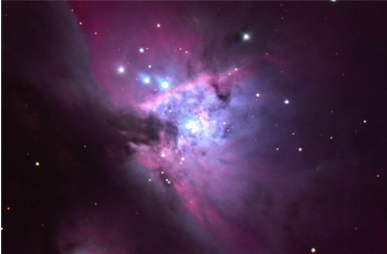 The Orion Nebula in the constellation Orion.

Hasse Stræde Hansen managed at the last minute to verify his work at one of the new telescopes in Australia by taking a couple of first-light images of objects in the night sky, before being forced to a hasty return to Denmark due to the Covid-19 situation. Photo: HSH/SONG

The two new telescopes in the "Stellar Observations Network Group" (SONG) project have been installed at the Mount Kent Observatory in Southern Queensland, Australia. From here they are to deliver starlight to a very advanced instrument; a spectrograph enabling researcher to investigate stars and search for exoplanets. With the new telescopes, expected to begin scientific measurements later this year, the network of telescopes in the SONG project is one step closer to the target of being able to observe any single star continuously 24 hour a day. This will be possible because one telescope in one part of the World takes over observations from another further East where the Sun is due to rise soon.

”Hasse's work both with software for controlling our new telescopes and with the general installation here at Mt. Kent Observatory has been enormously important for the successful start here. It is to a large extent due to his work that the integration of this new facility into the SONG network has been done on record time," explains SONG manager and Hasse's supervisor Mads Fredslund Andersen.