A 1D few body system of aligned spins with a single oppositely aligned spin (a spin chain) is a system showing great promise in quantum informatics. Many of the desired applications of such a system can be ex- pressed through the specification of a certain spectrum of eigenvalues and eigenvectors. This project seeks to develop a method for systematically predicting which symmetric trapping potential would yield a specific type of spectrum, using recently published code, machine learning and local density approximations to make the process as automatic as possible. Researchers will be able to use this to explore the feasibility of realizing any such system with a specific spectrum, ultimately resulting in an immediate blueprint for experimental implementation. This will make it easy to explore new systems for quantum state transfer, robust information storage, or something else entirely. The talk presents the various observations and tools used in the process, as well as the promising first results of its implementation, exploring new implementations of quantum communication spin chains resilient to disruption by external coupling. 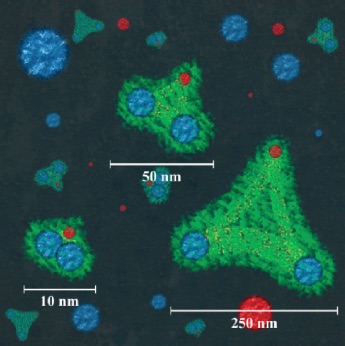 The Efimov scenario, where pairwise resonantly interacting particles form an infinite geometrical series of bound three-body states, the Efimov states, is one of the most fundamental effects in modern few-body quantum physics. The theoretical understanding and experimental observation of such progressions in both homonuclear and heteronuclear systems has been a longstanding challenge that requires exquisite control and tuning of mutual particle interactions and appropriate treatment of internal and external degrees of freedom. Taking profit from the drastic reduction of the geometrical scaling factor due to the high mass imbalance of Li and Cs atoms, we present the first observation of three consecutive LiCsCs Efimov resonances via threebody recombination rate measurements [1]. The previous analysis of Feshbach resonances [2] is extended with radiofrequency association of LiCs Feshbach molecules to obtain precise mapping of the applied magnetic field onto the scattering length [3]. This new parametrization of Li-Cs interaction properties is used to compare the measured recombination spectra, including Efimov resonance positions and scaling factors, with state-of-the-art few-body theories. These findings are used to elucidate the connection between the universal regime that is excellently approximated by two-body contact interactions and the short range dominated regime, which is described by the van der Waals tails of pairwise interaction potentials [4-7].