A backward-spinning star with two coplanar orbiting planets in a multi stellar system.

Recent paper in PNAS may explain how this can occur. Maria Hjorth from SAC is main author.

In a recent paper in the esteemed periodical Proceedings of the National Academy of Sciences a group of researchers led by Maria Hjorth and Simon Albrecht from the Stellar Astrophysics Centre, Aarhus University publish the discovery of a very special exoplanetary system. Two exoplanets are orbiting "backwards" around their star. This surprising orbital architecture was caused by the protoplanetary disk - in which the two planets have formed - being tilted by the second star in this system.

The title is: "A backward-spinning star with two coplanar planets"

Maria Hjorth explains: "We found a very intriguing planetary system. There are two planets that orbit around the star in nearly the opposite direction as the star rotates around its own axis. This is unlike our own Solar System, where all the planets are revolving in the same direction as the Sun’s rotation.’’

Joshua Winn from Princeton University continues: "This isn't the first known case of a 'backwards' planetary system - the first ones were sighted more than 10 years ago.  But this is a rare case in which we think we know what caused the drastic misalignment, and the explanation is different from what researchers have assumed might have happened in the other systems."

Co-author Rebekah Dawson of Pennsylvania State University, USA adds: “In any planetary system, the planets are thought to form in a spinning, circular disk of material that swirls around a young star for a few million years after the star itself is born, the so called protoplanetary disk. Usually, the disk and the star are spinning the same way. However, if there is a neighboring star (where 'neighboring' in astronomy means within a light-year or so), the gravitational force from the neighboring star might tilt the disk.”

John Zannazzi from University of Toronto, Canada continues: “ The underlying physics is connected to the behavior a spinning top displays, when its rotation slows down and the axis itself starts to rotate in a cone.” 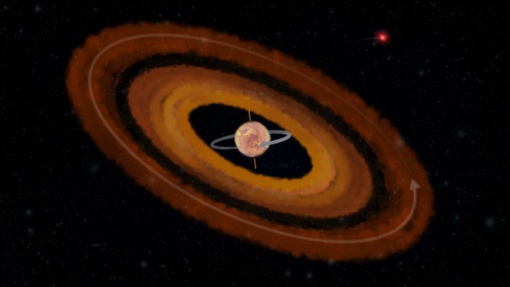 A protoplanetary disc has been twisted almost 180° before planet formation. Illustration: Christoffer Grønne.

The scenario was theorized in 2012 and now this research team has found a first system where this process has played out.  Teruyuki Hirano of the Tokyo Institute of Technology is one of the researchers, and he comments: “After we discovered the K2-290 system, we realized this system is ideally suited to test this theory, as it is not only orbited by two planets but also contains two stars. So logically the next step would be to study the system in finer detail, and indeed we have hit the jackpot.”

PhD student Emil Knudstrup from Aarhus University adds: "The idea that planets travel on wildly misaligned orbits has fascinated me throughout my graduate study.  It is one thing to predict the existence of these crazy orbits, so very different from what we see in the Solar System. It is quite another thing to participate in actually finding them! Also fascinating is the idea that a structure as enormous as a protoplanetary disk is governed by similar physics as a spinning top."
One implication of the discovery is that we can no longer assume that the initial conditions of planet formation exhibit alignment between stellar rotation and planetary orbits. Importantly, while other theories which aim at explaining misalignments in exoplanet systems tend to work best on large Jupiter like planets in short period orbits, the disk-tilting mechanism applies to planets of any size. There may be another Earth-like world, for example, that travels over the north and south poles of its home star.

“I find our results encouraging as it means that we have found another aspect of system architecture where planetary systems show a fascinating variety of configurations,’’ Simon Albrecht from the Stellar Astrophysics Centre, Aarhus rounds up. ‘’How would astronomy here on Earth have developed if the situation here had been similar to K2-290 — then Galileo would have seen sunspots moving in the opposite direction of the orbit of the Earth around the Sun. One just wonders what his explanation would have been to that?’’

The paper can be found via this link.