Using asteroseismology, a team led by an Instituto de Astrofísica e Ciências do Espaço (IA) researcher, studied two red-giant stars known to host exoplanets, and for one of them found a seemingly improbable planet. This is based on data from NASA's Transiting Exoplanet Survey Satellite (TESS), analysed using techniques developed at SAC, and several researchers connected to SAC are co-authors.

Surprise: An exoplanet shouldn't have survived the expansion of it's red giant star, but still it is there.

Using asteroseismic1 data from NASA’s Transiting Exoplanet Survey Satellite (TESS), an international team2, led by Instituto de Astrofísica e Ciências do Espaço (IA3) researcher Tiago Campante, studied the red-giant stars HD 212771 and HD 203949. These are the first detections of oscillations in previously known exoplanet-host stars by TESS. The result was published 29 October 2019 in an article4 in The Astrophysical Journal.

Tiago Campante (IA & Faculdade de Ciências da Universidade do Porto - FCUP) explains that detecting these oscillations was only possible because: “TESS observations are precise enough to allow measuring the gentle pulsations at the surfaces of stars. These two fairly evolved stars also host planets, providing the ideal testbed for studies of the evolution of planetary systems.”

Having determined the physical properties of both stars, such as their mass, size and age, through asteroseismology, the authors then focused their attention on the evolutionary state of HD 203949. Their aim was to understand how its planet could have avoided engulfment, since  the envelope of the star would have expanded well beyond the current planetary orbit  during the red-giant phase of evolution. 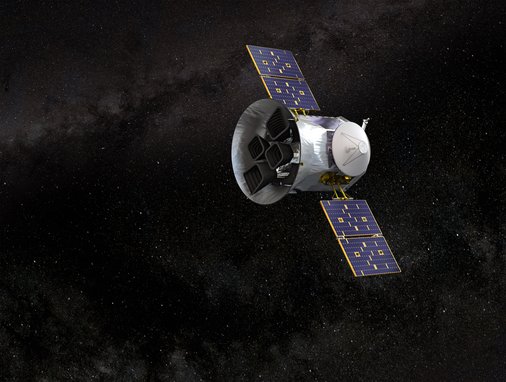 Exoplanethunter TESS - now through half of it's nominal mission. Illustration: NASA.

Co-author Vardan Adibekyan (IA & Universidade do Porto) comments: “This study is a perfect demonstration of how stellar and exoplanetary astrophysics are linked together. Stellar analysis seems to suggest that the star is too evolved to still host a planet at such a 'short' orbital distance, while from the exoplanet analysis we know that the planet is there!

By performing extensive numerical simulations, the team thinks that star-planet tides might have brought the planet inward from its original, wider orbit, placing it where we see it today. Adibekyan adds: “The solution to this scientific dilemma is hidden in the 'simple fact' that stars and their planets not only form but also evolve together. In this particular case, the planet managed to avoid  engulfment.”

In the past decade, asteroseismology has had a significant impact on the study of solar-type and red-giant stars, which exhibit convection-driven, solar-like oscillations. These studies have advanced considerably with space-based observatories like CoRoT (CNES/ESA) and Kepler (NASA), and are set to continue in the next decade with TESS and PLATO (ESA).

Tiago Campante explains that: “IA's involvement in TESS is at the level of the scientific coordination within the TESS Asteroseismic Science Consortium (TASC). TASC is a large and unique scientific collaboration, bringing together all relevant research groups and individuals from around the world who are actively engaged in research in the field of asteroseismology. Following in the footsteps of its successful predecessor, the Kepler Asteroseismic Science Consortium (KASC), TASC is based on a collaborative and transparent working-group structure, aimed at facilitating open collaboration between scientists.”

The paper in The Astrophysical Journal has the title " TESS Asteroseismology of the known red-giant host stars HD 212771 and 203949".

The ArXive version can be found here.