it appears in Monthly Notices of the Royal Astronomical Society for October 2019 with Kuldeep Verma as lead author.

The chemical elements tend to segregate in stars like our own Sun; a fraction of the helium and other heavier elements sink to the interior, leaving relatively more hydrogen float on the surface. In the Sun, this segregation happens due to a fundamental physical process, known as atomic diffusion, which is reasonably well understood. However, standard stellar models with atomic diffusion fail catastrophically in explaining the spectroscopically measured heavy element abundances as well as the more recent asteroseismic constraints on the helium abundance for stars more massive (by about 40% or more) than the Sun, as they predict complete depletion of both surface helium and heavy elements. This suggests for a missing physics in our understanding of these hot A- and F-type stars. 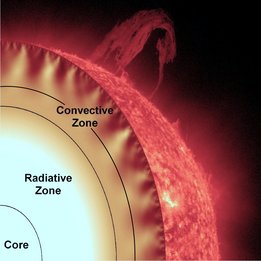 Calculating a much deeper mixing in the convective zone may be the solution to the He abundance problem. Illustration: adapted from NASA.

In the outermost layers of such stars, energy is transported from interior to the surface by turbulent convection, similar to the energy transport from bottom to the top in boiling water. We demonstrated that the mixing caused by the turbulence at the base of the convective envelope can reduce arbitrarily the settling of the helium and heavy elements. We found a much deeper mixing necessary to explain the observed asteroseismic constraints on the surface helium abundance of three F stars observed by the Kepler satellite compared to those obtained in previous studies performed with only the spectroscopic measurements of the heavy element abundances.