An exoplanet hot as Hell!

The Astronomical Journal of 6 December 2021 brings news about TOI-1431b. In the list of authors SAC and our collaborators are strongly represented.

One of the hottest exoplanets ever observed, has been described in a recent paper in The Astronomical Journal. The discovery builds on observations from amongst other sources the SONG telescope on Tenerife. It is a result of the collaboration between researchers at University of Southern Queensland and Stellar Physics Centre at Aarhus University.

TOI-1431 is a bright and warm star "only" 490 lightyears away, and orbiting the star is the enormous exoplanet TOI-1431b, also named MASCARA-5b with a "year" of only 2 1/2 days. The exoplanet massing a bit more than three times the mass of Jupiter orbits so close to its star that the surface temperature is 2700° C and slightly cooler on it's night side; only 2300°C. Exoplanets as hot as this are rare, and the high temperature causes the whole planet to glow in orange light - though not so bright that it is visible directly from Earth. The star is only visible from here in a minor telescope, but as it is positioned in the constellation Cepheus it is in our Northern sky all year around. A small extra curiosity is that the orbit of the exoplanet around it's star is in the opposite direction of the rotation of the star itself - quite the opposite of what we see in our own Solar System. 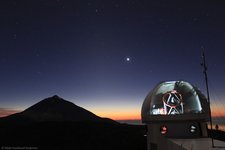 The Hertzschprung SONG telescope on Tenerife with the Teide volcano in the background. Photo: Mads F. Andersen/AU

The exoplanet was first detected by the NASA satellite TESS, and these observations have been followed up with ground based observations from amongst other places the Danish Hertzschprung-telescope on Tenerife, as a part of the telescope network SONG. This network is managed from Aarhus University, and until now the other telescopes in the network are placed in China and at the Mount Kent Observatory in Australia, managed by the University of Southern Queensland.

The paper mentioning the discovery of the exoplanet has been published in The Astronomical Journal of  6 December 2021, titeled ""TOI-1431b/MASCARA-5b: A Highly Irradiated Ultra-Hot Jupiter Orbiting One of the Hottest & Brightest Known Exoplanet Host Stars", and it can be downloaded here.