The history of the Department

‘Det fysiske Institut’ (the Department of Physics) was established in 1933 and shared, with the Departments of Anatomy and Chemistry, the first building complex of the Aarhus University, which was inaugurated on 11 September 1933 in the presence of the Danish royal family as well as the Danish prime minister and other government representatives. The King inaugurated the buildings with the following words (in translation): 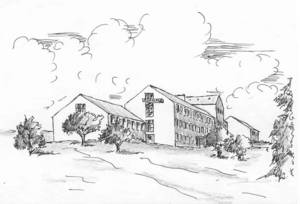 “In the hope that the scientific research which is to take place here may take place in spirit and truth, I hereby inaugurate the Aarhus University.”

A total of 600 m2 of the new buildings were allocated to physicists. The buildings, which now house, inter alia,  Department of Psychology and Behavioural Sciences , comprised offices, laboratories, preparation rooms and a small workshop. From the outset it was not a department with the objective of educating physicists – on the contrary: the members of staff were employed to teach physics to students from the medical science faculty, and serving this purpose a professor and two scientific assistants were engaged to help carry out exercise classes for the 60-80 medical students.

In addition to their teaching obligations, the scientific staff were able to conduct research: investigations of radioactive isotopes produced by neutron activation were of special interest as well as the building of electronic equipment to detect the emitted radiation. Due to the massive contemporary interest in atomic physics, the Department was given the opportunity already during the autumn of 1938 to start the erection of a high-voltage hall with a 1 million volt high-voltage plant.

Two years after the establishment of the Faculty of Science in 1954, the Department started proper teaching in the subjects physics and chemistry, several professors and associate professors were engaged, and research at the Department really got started. From the middle of the 1960s, research was strengthened when a number of accelerators augmented the experimental facilities.

At the beginning of the 1970s, the small number of staff employed when the Department was started, had risen to around 130 employees, and the expansion led to a severe shortage of both offices and laboratory space. The solution to this problem came in 1974 when the Department moved to the present buildings with a floor area of 14,000 m2. Also in 1974, the Institute of Astronomy moved to the University Park – to the same building as the Institute of Physics, and in 1992 the two institutes pooled their resources and became the Department of Physics and Astronomy as we know it today. The Ole Rømer Observatory, which until then had been home to the astronomers, is today used partly for public presentations (approx. 120 per year) and partly for teaching and research activities.

The observatory is housed in protected buildings in Højbjerg. The beautifully refurbished main building is used for guest apartments for researchers at the university. The observatory was designed by Anton Rosen, and was built in 1911 by the municipality of Århus for use by the German astronomer Friedrich Krüger (1864-1916). The municipality handled the operation until the Department of Astronomy in 1956 was established under Aarhus University. From 2022, a major renovation of the Observatory building has been launched. The 50-cm cassette-intelescope of the observatory is taken out of operation, but is preserved as a museum object, and the observatory will accommodate various astronomy historical exhibits with focus on astronomy at Aarhus University. The telescopes for use in the teaching of the sky at night and day are upgraded, and the observatory's Park area will also be designed for overnight stays in a shelter in connection with the astronomy communication, and a modern remote-controlled 60-CM telescope is set up for use in teaching in Denmark and abroad. The communication at the Ole Römer Observatory is handled by the Science museums at Aarhus University. In future, the observatory will also be used for instrument development, student training, public demonstrations, and the emergence of new observational techniques - to an increasing extent for scientific work, despite the location of the observatory in an illuminated urban area.

Necessitated by a substantial need for larger laboratories, the floor area of the Department was in 1988 and 1996 increased by a total of 10,000 m2 consisting of subterranean laboratories, which today include the storage rings ASTRID and SAPHIRA, and where, the world's first entire electrical storage ring ELISA was previously located.